Best Iranian food: an introduction for the fans of food tourism 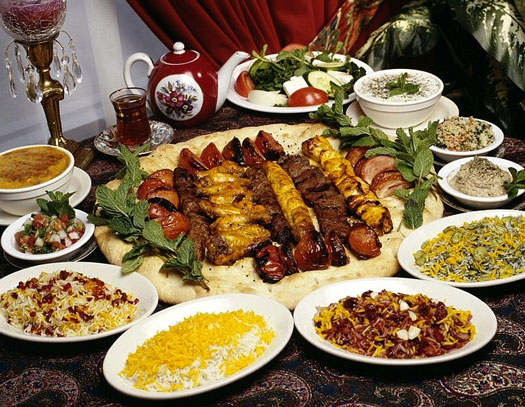 We all know that every country has its own kinds of foods and drinks harmonized with its culture. Iran is a unique country because of the variety of nations and different cultures. This fact has made Iranian food so diverse that even most Iranians haven’t tried them all. Therefore if you’re a fan of food tourism and visiting Iran, knowing the best Iranian food can help you a lot in choosing what to try while you’re sitting in a restaurant with a grumpy waiter beside your table. There are some Iranian foods which are famous worldwide and some that you might have never heard of them. Iranian people serve most their foods with rice and some with bread. In the following, we are going to introduce some of local and national best Iranian food.

Iranian people are in love with Kebab. They consider it a luxury delicious food and serve it at special occasions and ceremonies. There are different types of Kebab made from different types of meat such as Jooje Kebab which is chicken meat, Koobideh Kebab, Shishlik, Chenjeh kebab, Barg Kebab, etc. Shishlik and Barg kebab are the most luxury and delicious ones which are sheep’s ribs and the meat next to it. There is also a special type of Kebab in the northern cities of Iran which people marinate in the combination of walnut, pomegranate sauce, and some herbs. It is named Torsh Kebab that means sour Kebab. This one has a unique taste which you can try it only in Iran. 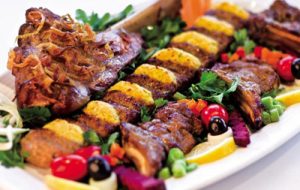 Iranian Kebab and its different types

Ghormeh Sabzi is one of the best Iranian food with a worldwide reputation which is served with rice. You have probably tasted it in Iranian restaurants around the world but the version of it made in Iran is totally different because of the fresh ingredients. It is a dish made from fresh herbs, onions, beans, meat and special Iranian spices. You can find it in pretty much every Iranian restaurant but we suggest you try the southern version of it. 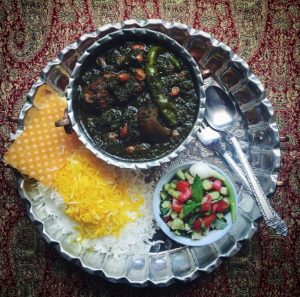 Fesenjan or Fesenjoon is a very delicious Iranian food with a sour and sweet taste and an international reputation like Ghormeh Sabzi. The ingredients are walnut, pomegranate sauce, sugar, and chicken or meatballs. Fesenjan is a national Iranian food but people from different regions make it differently with different taste. People serve this dish with rice. 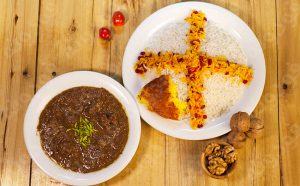 Dizi is one popular and loved dish in Iran. It consists many ingredients such as meat, chickpeas, potatoes, a piece of sheep’s rump, tomatoes, onions, tomato sauce, and spices. Most restaurants serve this food in special dishes which look like big cups. Eating Dizi has its own way which includes pouring its water out and mashing it with little mashers brought to the table. People usually eat this food with bread, pickles and raw onions. 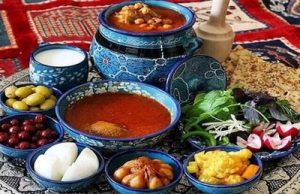 Dizi with onions and pickles

Mahi means fish in the Persian language. Ghalyeh Mahi is a dish that looks like Ghormeh Sabzi but tastes very different. If you’re looking for one of the best Iranian food in the southern cities, consider trying this dish. Iranians make it with fish, garlic, tamarind, special herbs, and spices. The real version of this food is hot and spicy, but people make it less hot in most cities except the southern ones. Sometimes they use shrimp instead of fish and call it Ghalyeh Meigu, which is the word for shrimp in the Persian language. 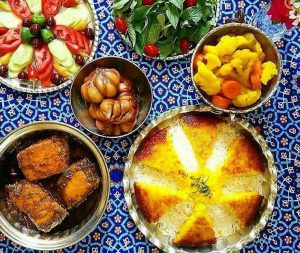 Visiting the northern cities of Iran includes not only seeing spectacular landmarks but also eating fascinating food. Baghala Ghatogh is one of these foods made from a particular bean, garlic, dill, egg, and spices in some dishes made of pottery. Northern people serve this food mostly with rice, but you can also eat it with bread. It is also one of the most popular northern foods in Iran. 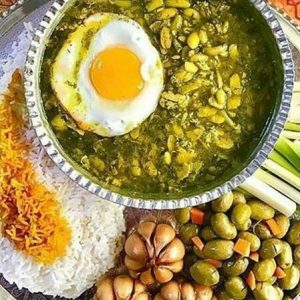 Ash Reshteh is an Iranian dish which looks like soup and includes beans, chickpeas, lentils, a particular type of noodles, herbs and onions. It is one of the best Iranian food which is perfect for vegetarian people and whoever enjoys a healthy hot meal in the cold weather. Iranians serve this food with Kashk, a particular kind of curd, and fried onions, mint and garlic. some people make this food for the Persian new year which is on the first day of spring. 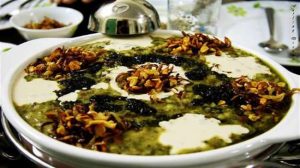 Polo means rice and Morasa’ Polo is a type of cooked rice with pistachio pieces, nuts, barberries, orange peel and saffron. Most Iranian people serve this rice with chicken which is in contrast with the sweet taste of it. You can also try it with Kebab and cooked Sheep’s leg. Iranians eat this food on special occasions like weddings so it is considered a luxury food. 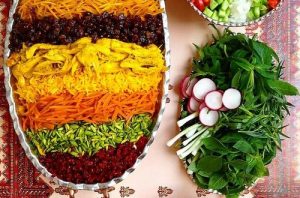 This one is a dish that may not look very good but tastes perfect. Kaleh Pacheh includes sheep’s legs and head which are usually served as breakfast or afternoon snack. It has different parts such as tongue, eyes, the flesh around ears, hooves, brain, etc. There are shops selling only Kaleh Pacheh at every corner in every city. So if you like trying new things and have an adventurous spirit, don’t forget to check it out. 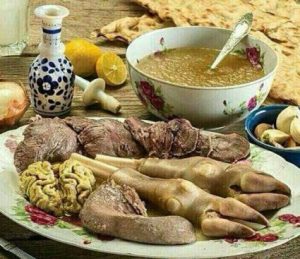 Tahchin is one of the best Iranian food loved by almost all Iranians. People make Tahchin with rice, egg, yogurt, saffron, barberries and chicken pieces in the oven or on the stove. It is actually a rice cake which is turned over on to a platter after it’s cooked. It has a golden crispy crust which is very loved and popular among Iranians. Most people serve this dish with yogurt or salad. Sometimes people make this food with eggplants instead of or with chicken. It is also another food that Iranians make on their ceremonies. 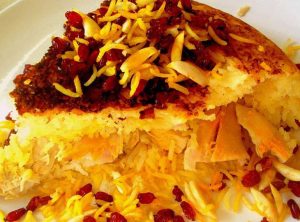